You are very welcome to come and train with us to see if triathlon is your sport. Since the 17th of October 2022, the 33rd board of D.S.T.V. Aloha consists of Daan Bossink (chair), Mathijs Tobé (secretary), Yasmin Nauta (treasurer), Pepijn Hoekstra (Commissioner of Internal Affairs) and Birgit  van den Burg (Commissioner of External Affairs). The board members can be reached via the email addresses shown below, the entire board can be … Aloha is a very active association, thanks to its active members. Therefore, we invite you to become active in one of our committees. Contact the board for more information The current composition of the committees can be found at the bottom of this page. They can also be contacted through their own e-mail address. Bar … At this moment, D.S.T.V. Aloha has five honorary members. Martin Bos (founder of D.S.T.V. Aloha) Together with Peter Hoogenshuis, Jean-Paul Hofkens and Harm Scholte, Martin Bos is responsible for founding our wonderful association. Patrick Hoekstra (swimming trainer) Patrick has been active as the swimming trainer of Aloha for many years. Marcel Meinema (extraordinary active member) … After you have ended your membership with Aloha (why would you do that?), you can choose to continue supporting Aloha by becoming member of Mahalo. Mahalo is the association for former members of Aloha. When you are a member of Aloha you will be invited for several activities for former members. Benefits of being a … 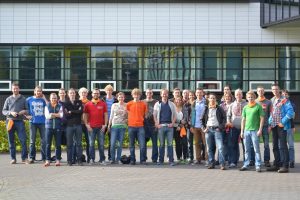 2019 Aloha! October 10th 2019, Aloha has turned 25 years old! To celebrate this the Lustrum committee organised a week full of fun, wacky and sporty activities in the week of the 7th to the 13th of October 2019. This year we had a very nice copy of the Palmboom again: click here to download …

As an association, we have custom sports clothes for our members: ideal for triathlon! Thanks to the clothes of Rogelli and our sponsor NonStop Running, we kan currently order clothes twice per year. Ask the board when it is possible to order clothes again in case you are interested. Are you curious what these clothes …